I mentioned earlier that the summer was trying to kill us. Apparently I spoke too soon. Apparently everything I detailed there wasn't enough to keep us occupied. Because, well...

My wife called me at work yesterday. Sometime Sunday or Monday, Firstborn got a bug bite on his belly button. I'd actually noticed this Monday night, but I hadn't thought much of it. It just looked a little red. But he'd scratched at it, and now (Tuesday morning) it was the site of a staph infection, and had swollen to "about the size of a baseball". I dearly hope my wife was exaggerating about that; I didn't see it.

The Beautiful Woman took Firstborn to the doctor, where they gave him a couple of huge shots of antibiotics (one in each cheek, so to speak) and some sort of steroid. (Probably anti-inflammatory, but I really don't know.) And apparently, until I came home and clarified the situation, he thought that the needles were still in there. Which is understandable, under the circumstances. It probably felt that way.

He was feeling a lot better this morning, and his belly looked better, too. He says his bottom still hurts, though. So the boys are having a quiet day at home, which is probably for the best.

Rather than gripe about the sundry ways in which our Universe is clearly mismanaged, though, I think I'll put up some pictures of the kids. (I'd go with otters - they're cute and cheering - but the kids are more in keeping with the topic.)

This is Firstborn at his birthday party back in June. He's playing with a plush facehugger (from the Alien movies) and a plush Nyarlathotep (one of H.P. Lovecraft's Elder Gods, not that I should have to explain that to anyone who reads this blog). The facehugger is understandably confused about which direction is Nyarlathotep's face. 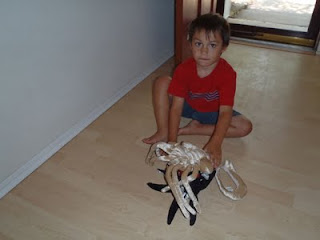 This is Firstborn grinning at one of his presents, also from his birthday. 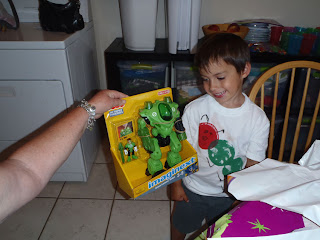 This is Secondborn playing in the sandbox at his grandparents' (my parents') house. 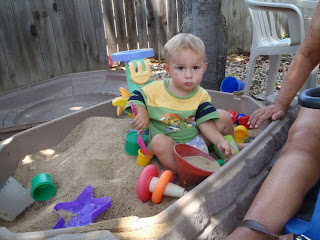 This is the oldest of their cousins, who is visiting her Nana and Poppy (my wife's parents) this week. She and Firstborn get along wonderfully, not that you can tell from this picture. She's napping at my parents' house, where I took them on Sunday. (The red bear sitting by her head is called Napping Bear for reasons which should be obvious.) 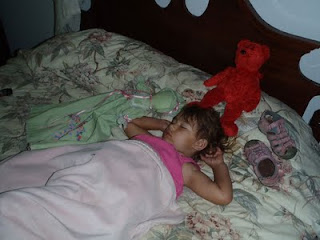 And finally, here are the other two cousins. They are teeny twin girls. 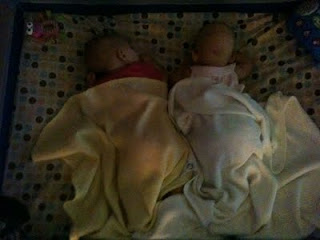 So there you go. Youthful goodness, delivered right to your monitor screen. I hope everyone else is having an easier time of things - and if you aren't, I hope things get better. Immediately. Sooner than that, if possible.
Posted by Michael Mock at 12:39 PM

Email ThisBlogThis!Share to TwitterShare to FacebookShare to Pinterest
Labels: anecdotes, Parenthood, Things I have Learned The Hard Way, Why me?