In our house, bedtime is an exciting time. It's exciting because the mere prospect of having to go to sleep fills both boys with a fresh burst of vigor and vitality. It's exciting because even though we've used exactly the same schedule for the last five years, we never know what's going to happen. It's exciting because it's bedtime, but it's not even dark yet - it's just NOT FAIR - Waaaaaah! It's exciting because no matter how much stuff the Beautiful Wife and I have left to do, or how vital those projects might be, there is always a notable chance that one or both of the boys will manage to Not Go To Sleep until eleven-thirty at night.

And sometimes, it's exciting for... other reasons.

Last night, Firstborn - who will turn seven in June - got out of the shower and picked out a towel with which to dry himself. The towel on top of the pile was the Cute Yellow Duck Towel, which has an extra layer of cloth in one corner; the idea being that you can sort of tuck that corner over the top of your child's head and wrap the child with the rest of it, thus transforming your little darling into a terribly unconvincing duck and probably setting off an hour-long temper tantrum, but I digress. Where was I? 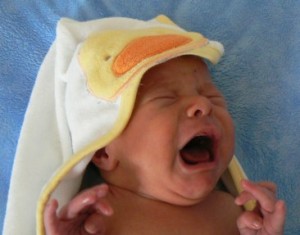 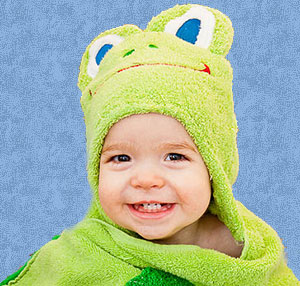 Note: also not my child.
So, once he'd dried himself to an acceptable point, Firstborn hung the Cute Yellow Duck Towel on his head. Only he didn't set it so that it hung down his back, as is the usual practice. No, he positioned it so that it hung down over one shoulder. Then he scooped up the Cute Green Froggy Towel, and hung it over his other shoulder. Half of him was now green, and half of him was yellow, and he could see out of the opening between the two hoods.

...At which point he charges out of the shower, comes dashing into the kitchen, and loudly announces: "Look! I'm half frog and half duck! I'm a FUCK!"

I... I just... I'm just grateful that he didn't burst out with this in the middle of a grocery store or something.
Posted by Michael Mock at 9:00 AM