So Secondborn woke up at four in the morning. I became aware of this when he went running out of his room and down the hall, shrieking like a miniature banshee. I went and intercepted him, picked him up, and tried to comfort him. He, meanwhile, continued shrieking, only rather closer to my ears than he had been before. (He'd made it all the way to the back door, and seemed confused about why it was so dark outside.) So I took him into the kitchen.

Apparently, he was hungry. I have no idea how I deduced this - in fact, I'm not entirely sure how I was upright - but I handed him a hunk of string cheese and some crackers, and he scarfed them down. I think I got him some water, too. He calmed down once he had food in front of him, and about twenty minutes later I was able to set him back on his bed and watch him go right back to sleep.

So now, as you might expect, I am just the least little bit tired. But, being... well, me... I can't just say, "Wow, I'm really tired," and let it go at that. Oh, no. No, my brain keeps right on going, and immediately wanders off-track: "Wow, I'm really tired. Also, the Zombie Apocalypse is probably eminent. In fact, I should try to pay attention for the screams of my co-workers and the breathy moans of the hungry dead. Am I too tired to fend them off?"

I'm sure that many of you are also wondering about that last question. After all, parents who are awakened by small children in the wee hours of the morning are seldom in any condition to remove the head or destroy the brain when the undead come calling. Fortunately - you'll be pleased to learn - nature has provided for us even in such terrible circumstances. We benefit from the classic evolutionary defense known as Mimicry. You see, parents in this condition are nearly indistinguishable from zombies. We stagger around, unsteady on our feet; we moan softly under our breath; our metabolic and neurological activity drops to the bare minimum necessary to sustain the spark of life. Recent testing has revealed that this uncanny similarity is so convincing that in 80% of test cases even the undead themselves cannot tell the difference between an exhausted parent and another zombie.

So, should you find yourself in this terrible circumstance, where the dead have risen from their graves, civilization is crumbling around you, and you are far too tired to consider a more active defense, remember this important safety advice: Just Go Home. If you stagger away from your desk and out to your car, the odds are quite good that the zombies will never notice you... especially if they're distracted by your more active (and hopefully panicking) co-workers. 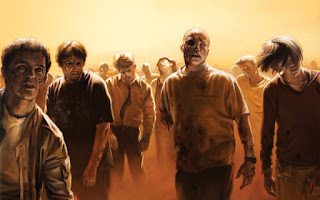 Can you spot the exhausted parent in this crowd of zombies?
This important safety information has been brought to you by your friends at the Department of Unnatural Resources.
Posted by Michael Mock at 7:28 AM