Since I'm hip deep in the busy season and not getting a lot of my own stuff done, I thought I'd promote other people's work. These aren't reviews, as such - they're just things that I'm reading and enjoying that I think more people should know about.

First up: New Friends by Jeffrey Jordan Mills. In the interests of full disclosure, I should mention that I've known Jeff since college; so, among other things, I've known for quite a while that he could write like this. While the story is about high school students, and told from the perspective of a high school student, it's perfectly enjoyable for adults, too - at least, if you don't mind being reminded of some of the more ridiculously uncomfortable and embarrassing elements of going through puberty. I wouldn't, in other words, classify it as a Young Adult book, unless Young Adult books have gotten a lot more brutally honest than I remember them being.

For a brief overview of the plot, I'm going to borrow from the product description on Amazon:

Adam Barrow is a Disposable Friend for most of the girls he knows. He gladly serves as their confidant and problem-solver until he is no longer needed. It's fulfilling work, though not always entirely gratifying.

When a mysterious new girl appears at his school, Adam is captivated (as is to be expected), but he quickly learns that Lydia Sinth has secrets like none of the other girls who have sought his counsel.

Already struggling through the quagmire of puberty, Adam gleefully takes on the additional burden of Lydia's unbelievable secret.

I would offer one small correction: Adam doesn't so much take on the burden of Lydia's secret, as agree to help her keep it secret while trying to unriddle her himself.

Next up: Pulchritude, by Ana Mardoll. Full disclosure again: I consider the author an iFriend, in that I follow (and comment on) her blog, and have corresponded with her online, but have never met her in person.

Pulchritude is a retelling of Beauty and the Beast, so for most readers the basic plot will already be familiar. This telling, however, takes that plot and looks at it character by character, exploring personalities, motivations, and conflicts. Beauty and the Beast has always been a story about finding love in spite of flaws, and the characters here certainly have their share of flaws to overcome - or, if not overcome, at least reconcile. By exploring those flaws, and the ways in which the characters deal with them (in themselves and each other both) Ana Mardoll creates a compelling new version of an old and well-known story, at once fascinating and diverting. 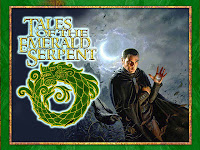 Last up: Tales of the Emerald Serpent, a shared world anthology. I haven't read this one; it doesn't exist yet. It's a Kickstarter project, which means that if enough people pledge to support it, it will get produced; otherwise, the book never happens and the folks who pledged money don't pay anything.

Shared World Anthologies, for those of you who aren't acquainted with the concept, are an interesting sort of project. The idea, basically, is that a bunch of different authors get together and write short stories set in the same world. Generally, the authors involved are working from the same source material; often, they'll correspond and interact, so the events of one story may be mentioned or even expanded in another.

Tales of the Emerald Serpent features stories from several very good authors, including Martha Wells (whose work I've recommended before). So please go help this project out; I really want it to get published so I can read it. You can pledge at varying amounts of money for varying rewards: a $5 pledge will get you a copy of the ebook version, for example, while a $30 pledge will get you the ebook, a couple of bookmarks with art from the project, plus an 8.5x11" print of the book's cover and a pdf copy of the Builder's Guide. Check out the site for the donation levels and their associated rewards.

...And that's it for me; comments are open for anyone who wants to talk about their own projects, or other things that they'd like to recommend.
Posted by Michael Mock at 7:58 AM