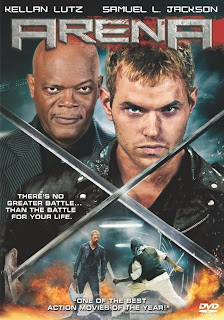 Last night, I watched the movie Arena while I was folding laundry. (This is not an uncommon combination of activities, unfortunately. The days when I could set aside time and fully devote my attention to a movie belong to a distant and possibly mythical past; life with children does not permit such an abundance of free time.) While I don't intend to review the entire movie, I am going to talk about it in terms of writing (or in this case, choreographing) realistic fight scenes. The fight that I'm using as an example takes place in about the first three minutes of the movie, so the spoilers should be minor and inconsequential; nevertheless, there are spoilers. You have been warned.

I should also point out that there's going to be some discussion of violence and injury here, so if that sort thing squicks you out, you really shouldn't read any further.

Right, so: the movie opens with two men fighting in a faux-Roman arena. One man is armed with a pair of swords, shaped roughly like the Roman Gladius but about twice as long. The other is armed with something that I'd consider a voulge - a type of polearm with a large, cleaving blade on one end.

My first impression, of course, was: This is not an even match. They're on open ground, and the polearm has a clear advantage in reach. To have any chance at all, the swordsman is going to have to avoid getting killed long enough to move closer so he can launch attacks of his own - not easily done. And if he does get close enough to attack, he's going to have to kill or disable his opponent quickly, before the polearm clobbers him. If the guy with the polearm gets in a successful attack, then the battle ends even more quickly. So, either way, I'm not expecting a long fight.

But the choreography cheats around this problem, and does so reasonably subtly: with lots of maneuvering and dodging and throwing kicks or punches at strategic moments. There are even a couple of disarms, as the swordsman manages to disarm the polearm guy, only to have the polearm guy take one of his swords away. (This pretty clearly indicates that they're both vastly better at unarmed and disarming techniques than they are at actually using their weapons, but never mind that.) Also, in the course of this, they manage to slice each other up a bit - though, this being Hollywood, nobody actually goes into shock from pain or loss of blood.

Finally, though, the one with the polearm manages to knock down the swordsman, reclaim the voulge, and bury the cleaver-blade in the swordsman's kidney, parallel with the spine. (It's not really an attack, at that point; it's a splitting-logs-with-an-axe sort of motion.) The fight is finally over.

However, at this point the fellow running the games surveys the audience to decide whether the fallen gladiator should live or die. This was where my Suspension Of Disbelief collapsed like a pup tent in a hurricane.

The defeated gladiator has just had one side of his torso smashed open with a polearm. At the very least, the blade has almost certain split his kidney in two. Given the size and shape of the blade, it's probably done a number on his intestines as well, and quite possible more: split one or two of the lower ribs, sliced across the diaphragm, punctured a lung. It missed the spine, so he's probably not paralyzed, but even with immediate attention from an expert trauma team in a fully-stocked emergency room and the best first-world antibiotics available, I'd give him no more than a one-in-four chance of survival. Probably less than that; I'm guessing, here. An EMT or the right sort of medical doctor could give you a more accurate estimate.

So asking the audience if he should be spared is, in all likelihood, a bad joke. If he's not dead already, he's almost certainly in shock and bleeding out: well on the way to dying. (And, by the way, every second you wait on the audience response is a second closer to him being dead.) The blade of the voulge may be tamponading the worst of the internal bleeding, but that won't last long.

Even if he did manage to survive, he'd be looking at months, maybe years, of recovery and rehabilitation before he could even consider fighting again. And that's assuming that his injuries didn't cripple him in one fashion or another.

Real fights to the death tend to be over very quickly, especially when weapons are involved. This is why most sport fighting has some equivalent of the Queensbury Rules, and why a lot of historical duels made allowances for stopping at first blood. Otherwise, you lose a lot of fighters to death or maiming. Armed combat generally isn't about two men wearing each other down until one or the other can't continue; that's much more the province of unarmed fighting. Fights involving weapons tend, by nature, to involve much more decisive injuries. There are exceptions, of course; but that's the way to bet.
Posted by Michael Mock at 8:48 AM