Our Very Own Superhero: Lightning Zapzers 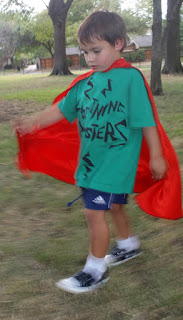 The cloak was the origin of the superhero, I think. Firstborn actually owned the thing, and while it eventually got lost it has not been forgotten. (You know what? While I'm thinking about this, I really ought to replace it. He got a lot a mileage out of that cape...)

So anyway, Lightning Zapzers has been a recurring theme in Firstborn's play. Whenever superhero stuff comes up - notably last night, at McDonalds, where they're doing Green Lantern Happy Meals to promote a new animated series - Firstborn eschews the established heroes in favor of one that he created himself.

Now, personally I think that's awesome all by itself. But Lightning Zapzers is a pretty cool guy. Among his more notable powers are the ability to brrzap Bad Guys with lightning, and the ability to swing around on his lightning rope.

This is particularly funny to me because I just finished playing Infamous, a video game in which the main character - you guessed it - develops lightning-based superpowers. I'm currently working my way through the sequel, Infamous II, and the night before last I acquired a new power. That's right, I can now swing around on lightning ropes. So the guy I'm playing, Cole MacGrath, is pretty much the grown-up version of Lightning Zapzers. And yes, I realize that the game designers did not rip off my five-year-old son's ideas, but as a parent I'm still vastly amused by the similarities between the two.

Lightning Zapzers is so cool that he actually has his own theme song. (This was a costume party, and they decided to stage a little talent show at the end. The boy who went before Firstborn decided to sing the Spiderman theme song, from memory. When Firstborn's turn came, he decided to sing a song about his own superhero, and made one up on the spot. I'm not sure whether or not he realized that the other boy already knew the Spiderman song, but I'd lean towards 'not'.) So, if you think you're worthy of the unalloyed awesomeness that is The Ballad Of Lightning Zapzers, join us below the cut:

Here, as best we can decipher them, are the lyrics:


The Song of Lightning Zapzers

And that, ladies and gentlemen, is how Lightning Zapzers came to be.
Posted by Michael Mock at 3:23 PM