Despite the current chaos, I managed to get Firstborn to school. On time. Unruffled, even. Here's how it went:

First, I went into Firstborn's bedroom to wake him up: 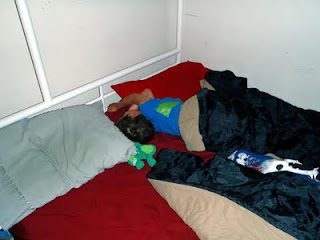 Yes, that's Cthulhu on the bed beside him.


I shook him, and said something profoundly important, like, "Hey! Time to get up! C'mon, it's time to get up!" But, as you can see, I was not sufficient to the task: 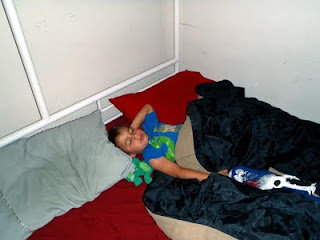 So I tried again, and this time (when I removed the comforter) he did get up. Yay, me! Yay for Firstborn!

Then he brushed his teeth: 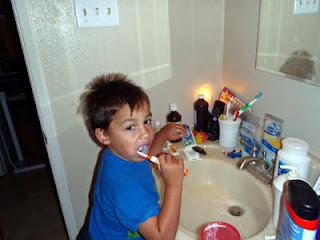 Then we loaded everything up and got in the car. Then, halfway down the block, we turned around and went back for his backpack (which also has his lunchbox). Then we tried again, and this time we made it to the school! Hooray!

So we parked and walked in: 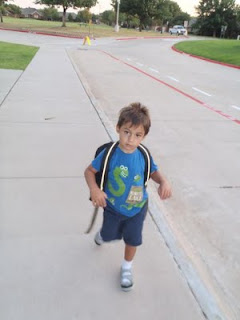 Except, I made him stop so I could take the obligatory In Front Of The New School On The First Day shot, like so: 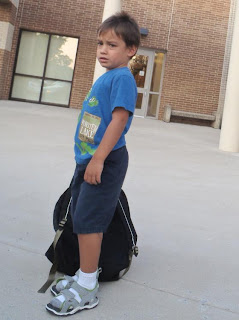 There was supposed to be a chance to grab breakfast in the cafeteria, but first they sent us into the gymnasium, where they were assembling stray students. Stray parents, too. 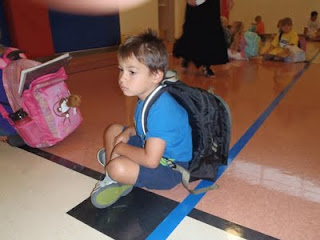 After a couple of minutes, someone came into the gym and found us again, and explained that actually the cafeteria was open, and they'd just been confused about that. So they pointed us at the cafeteria, and we went and collected food.

It turns out that the cafeteria uses a sort of debit system for the students. So I could buy breakfast for Firstborn, or I could just hand them some money to put in his account. Since breakfast was a whopping $1.10, and I was paying with a $10 bill, I had them just put the rest in Firstborn's account. So now he's covered for another eight meals or so.

And what a meal! He had a corndog... well, sort of. It was actually a sausage on a corndog stick, and it had been cooked in pancake batter instead of corn bread. But Firstborn loved it, and om-nom-nommed his way right through it. There was a little plate of scrambled eggs with cheese, and he ate some of that, too. Then he drank most of his chocolate milk. He could have had a side of sliced pears, too, but he decided that this was enough food. 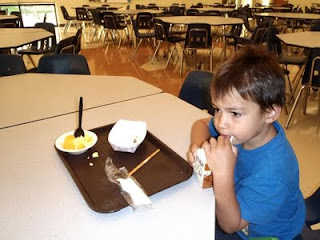 Once he was full, I walked him down to his classroom. He found his locker and put his backpack inside, and then we went into his classroom and he found his seat. There were crayons and paper already out, so he started drawing something (I'm guessing a scorpion or a monster). I took one last picture... 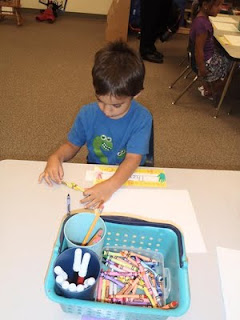 Then he got busy drawing, and I slipped out of the classroom like a sneaky, sneaky ninja-daddy.

And there you have it. That's how Firstborn started his First Day Of Kindergarten.