Not The Christianity I Remember: Christmas 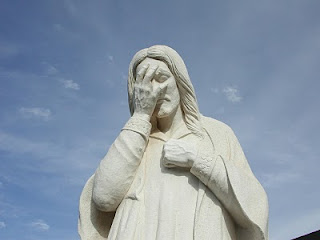 "Keep the Christ in Christmas."

I remember that admonition from my youth. We heard it in our church, preached from the pulpit. Don't let the world distract you. Don't get so caught up in buying presents and celebrating the end of the year that you forget that we're also celebrating the Birth of Christ. For us, as Christians, that is the Reason For The Season.

I'm not a Christian anymore. And after decades of silence, I'm hearing the admonition again. "It's okay to say 'Merry Christmas'." "Keep the Christ in Christmas." "Jesus is the reason for the season."

But somehow, here in America, the meaning has changed. What I remember is an admonition from Christians, to Christians. "Don't forget why this season is important to us, as Christians." It was the remembrance of the Savior's coming, and the hope for His coming again.

When I hear it now, it is neither of those. It's not just okay to say "merry Christmas". To a certain mindset, it's mandatory. Anything else is not Politically Correct. If I say, "Happy Holidays," it's not because I hope you'll have an enjoyable New Year, too. It's because I'm part of a vast and vicious conspiracy to rob Christmas of its true meaning.

"Keep the Christ in Christmas" has become, not a reminder from Christians, to Christians; but rather a way to bludgeon non-Christians, or not-sufficiently-Christians, with the idea that this is a Christian Holiday.

It isn't. It never was. Look at the Bible. Jesus wasn't born in December. He wasn't born in the winter at all. Look at all the other imagery associated with the midwinter celebration: evergreens, mistletoe, the holly and the ivy, exchanging gifts... these are fundamentally (and originally) pagan things. And these things have been part of the celebration for centuries.

Yes, Christmas is the Holy Day when Christians celebrate the birth of Christ. No, it isn't purely that. It never has been. Relax. The term "Xmas" has been in use since at least 1700, probably longer. It goes hand-in-hand with the use of "Xtian" (or "Xpian") for Christian. There's no modern conspiracy to remove Christ's name* from Christmas by substituting an X. And if it's an ancient conspiracy, it's been failing for hundreds of years. Why worry about it now?

For the love of all things holy, these times are meant to unite us. Using them to sow division, or demonize the folks who do things different from you, is a particularly vicious sort of sacrilege**. So whoever you are, whatever you believe, I hope the coming year is better than the past one, and I hope you can celebrate without the need to make others feel less.

** This line originally said "as close to purely evil as you can get", but upon re-reading I decided that that was seriously overstating the case.
Posted by Michael Mock at 12:08 AM

Email ThisBlogThis!Share to TwitterShare to FacebookShare to Pinterest
Labels: Christmas, Not the Christianity I remember, people are strange, religion