While driving around yesterday, I saw this: 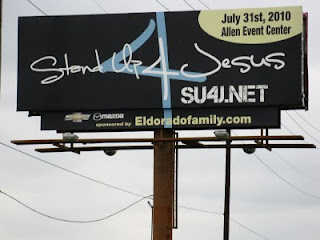 You'll notice that it has a web address - www.su4j.net - which is fairly entertaining if you care to go take a look. The folks responsible (Craig Nedrow Ministries) present this as a spiritual call to arms, a time for all Christians to stand up, set aside their differences, and... I dunno, be Christian together or something.

I suspect he's not nearly so dismissive of doctrinal differences as his homepage would suggest, but that's nothing more than cynical speculation on my part.

Anyway, what struck me as wrong about this is, well, the same thing that strikes me as wrong about a lot of Christian Calls-to-Arms. It's this notion (sometimes implicit, sometimes explicit) that God Needs Our Help. Apparently God really wants to pour out blessings on our nation and our personal lives, but He can't unless (or until) we do something (change our ways, recruit more Christians, overturn Roe-vs.-Wade... fill in your own blanks, you've probably heard some version of the pitch before).

There's an alternative approach to the sales pitch, of course. Sometimes it's presented as a matter of Divine Will - God has all power, but he won't pour down his blessings unless we shape up our behavior. This view still doesn't strike me as exactly flattering - it still has the Almighty beholden to human behavior - but it is at least a bit less overtly insulting. And honestly, the God who parted the Red Sea and provided manna for his chosen people to live on shouldn't have a hard time dropping messages for a predominantly-Christian nation that's wandered a little off the path.

The problem with this view is that it places God in the role of some of my Southern relatives, who appear unable to communicate directly about anything that bothers them. If someone does something that they don't approve of, they'll talk about it with other relatives, and even send roundabout messages through intermediaries (with the inevitable result that the messages are often garbled in transition). The one thing they won't do is sit down with the person, tell them what's bothering them, and suggest a way to fix it.

That's a horrible way to communicate your expectations. It's inefficient and weirdly passive-aggressive. A being with no limits to its knowledge, power, and goodness should be able to do better - much better - than that.

But God chooses not to communicate His complaints with America directly. This suggests two possibilities to me: either we're doing fine, and He doesn't need to guide us; or He likes to make us guess what it is that He wants. Either way, I don't see anything there to stand up for.
Posted by Michael Mock at 12:17 AM

Email ThisBlogThis!Share to TwitterShare to FacebookShare to Pinterest
Labels: people are strange, religion