I was reading this post at Forever In Hell, and it reminded me of something.

You should really go read the post yourself, but the short version is this: there's a fundamentalist/evangelical Christian girl who has gone on a mission trip to Japan. While she was there, she visited "Asakusa Temple" (more precisely, Sensō-ji). She sent an e-mail back about the experience. Her description of the temple focuses on the people bowing to false gods, practicing pagan rites, and dropping money into... I can't tell from her description, but I'd bet it serves the same basic purpose as a collection plate in a Christian service. Not only is she blind to the beauty of the place, not only is she appalled by the perverse abominations of non-Christian religious practices, but she absolutely refuses to see the place on its own terms. She's entirely locked in to her way of looking at the world, so the guardian statues are described as "demons", statues and other icons are "false gods", and like that.

I wonder what she would have thought of Rosslyn Chapel? Admittedly, to see this, her mission trip would have had to visit Darkest Scotland to convert the heathens... which strikes me as funny all by itself. But never mind that; suppose she went there. 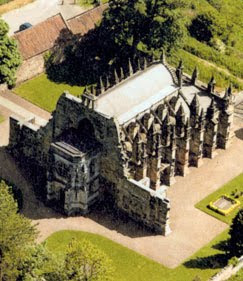 Rosslyn chapel is not especially large. It was dedicated in 1450 (construction started back in 1446), as a collegiate chapel which would care for its founder's spiritual welfare and provide a local center of learning. In 1571, the chapel's endownments were seized, its staff was forced to resign, and its altars were destroyed - you can blame the Reformation for this. The chapel fell into disuse until 1862, when it was rededicated following a period of repair and restoration. It remains in use to this day.

So we're talking about a place that has been exclusively Christian since it was first built, where people still worship. Dan Brown's literary conspiracy theories aside, the chapel is probably best known for its statuary. I had the good fortune to visit the chapel in my youth, and the stonework occupied most of my attention while I was there. There are carvings everywhere - statues of saints outside the building, depictions of the Seven Deadly Sins and other things inside. Including this:

Yes, that's a Green Man. The Rosslyn Chapel website describes it as "historically a pagan figure" as if it were later incorporated into Christian iconography. To the best of my knowledge, that is not the case: it started pagan, and stayed pagan. There are over a hundred representations of the Green Man inside the chapel, and they're a little disturbing to look at: it's a round, chubby face (which reminded me very much of a statue of the Buddha), and its expression is ambiguous. It might be about to offer you a smile; it might be about to bite you. The picture doesn't really do it justice.

I can't help but wonder how the girl from the mission trip would react to that. I mean, it's an unequivocally Christian holy site, so I expect she'd find it harder to dismiss the figures as demonic - though I'm cynical enough to suspect that she'd take it as more evidence that the Church of England is a false and misguided Christianity. Given her starting points, I'm not sure she could reach another conclusion.

There's something about the place, though. I wandered around outside, looking at the statues of the saints: somber, pious, serious. And I thought about all those Green Men, spilling their vines across the walls inside, and grinning away like anything. And I found myself wondering: what sort of god would make so many different kinds of people - with their different skin tones, different body types, different personalities, living in vastly different environments with different requirements for survival, creating different languages and different cultures - and then offer only one single, narrow path to Salvation? An idiot, that's what. And God, by most accounts, is not an idiot. ...No, if God exists, it's perfectly clear that He adores variety. It was my own little private epiphany, and Rosslyn Chapel was directly responsible for it.

I don't know anything about the girl on the mission trip. I don't know who she is, where she's from, what her private thoughts and doubts might be. Maybe her trip to Sensō-ji affected her in much the same way that Rosslyn affected me, and the e-mail she sent to her family was just telling them what she thought they wanted to hear. It's not really my business, but I hope so. Travel should be enlightening.
Posted by Michael Mock at 8:59 AM