So, today was Firstborn's first day of school. He's now officially a Third Grader. How did this year compare with previous ones? Well, in a word, it was mellow. It was a massive struggle to get everyone going for the first day of Kindergarten. (And, man, it was still rough even a few days later.) Starting First Grade was easier, but still some work. (And, a day later, it was considerably more enthusiastic.) The first day of Second Grade was even easier, and included yet another obligatory picture.

Reading back through those entries, I'm noticing a trend: I tend to be sick and/or exhausted at this time of year. I seem to remember promising myself, somewhere around this time last year, that I'd put in for a week of vacation during the first week of school. In fact, I seem to remember making myself that promise several years in a row, and the forgetting about it every time.

Anyway, this year? Mellow. Firstborn woke himself up, so he was already up and about: 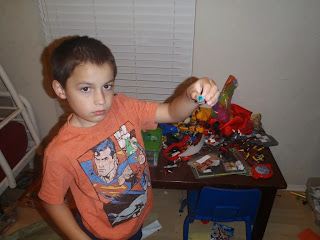 He also got himself dressed. My wife is starting her very first semester as a full-time college professor (she's been an adjunct for years), so once again she and Secondborn were able to come along and see Firstborn off. 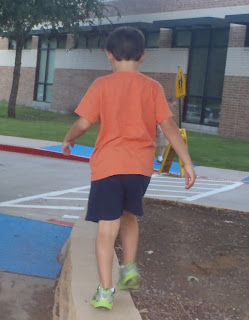 Firstborn likes to walk on top of high things.
I don't know where he gets it from.
It's very mysterious.
Secondborn followed along; as far as I can tell, he's actually disappointed that he didn't get to start school this year. 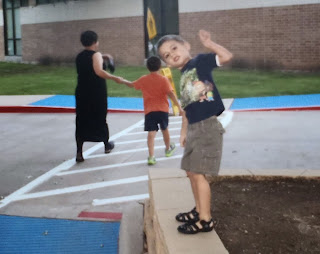 Secondborn, also with a very mysterious love of high places.
We took the obligatory In Front Of The School shot: 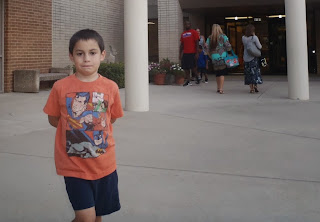 ...And then did one just like it with Secondborn: 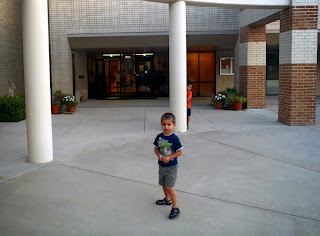 He's just sure he's ready to start school.
And then the Beautiful Woman went off to drop Secondborn at his preschool/day care thing, and I went back home to be massively sick. Which, again, seems to be par for the course for this time of year.
Posted by Michael Mock at 10:13 PM

Email ThisBlogThis!Share to TwitterShare to FacebookShare to Pinterest
Labels: Parenthood