I had honestly forgotten that these even existed. The toy line -- and, of course, the associated cartoon -- was called M.A.S.K. The heroes all wore... well, not masks, exactly, but helmets... which they put on whenever they were doing something dramatic and important, usually with laser blasts. They had vehicles that transformed, or separated into other kinds of vehicles, or suddenly sprouted turrets so they could fire the laser blasts. Their goal was to sell lots of toys to impressionable children defeat the evil criminal organization known as V.E.N.O.M. -- which was absolutely not a complete ripoff of the bad guys from G.I. Joe. That was the evil criminal organization known as Cobra. Completely different.

Anyway, I found this guy along with several others: 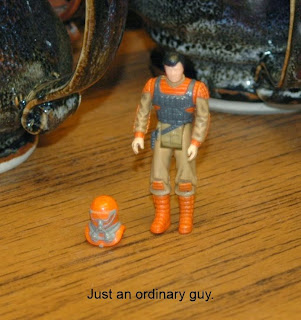 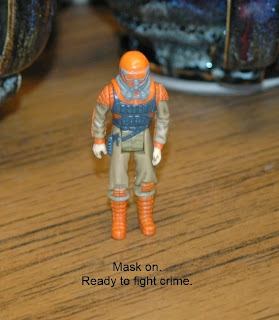 ...And, having found him, I then went and found the cartoon on YouTube. It's there because... um... well, mainly because nothing ever really dies if the Internet has any say in the matter. This is just the intro, but it should give you a pretty good taste of what the toy companies inflicted on our childhoods back in my day: