So, since I'm sure some of you are curious about how Secondborn looks with his new pirate scar, I thought I'd post some pictures. However, since some of you might also be a little squeamish, I'm putting the images below the cut.

On a related note, we joined my parents, my brother, and his wife at the Dallas Arboretum on Monday, to see the Chihuly exhibition of blown glass. This was lovely, but also brutally hot and very, very sunny. Afterwards, we went swimming at my parents' house, which was also sunny. So I wasn't terribly surprised that I wound up with a moderate case of sunburn. (I hate sunburn. It's not the burny parts, it's the wow-I-suddenly-feel-sick parts.)

What was more surprising was that after we finally got everyone home and fed, Firstborn was suddenly and surprisingly ill. I have no idea if the heat brought that on, or whether he was already coming down with something, but it was pretty ugly. Poor kid. Beautiful Wife was also sick, though not quite so spectacularly, so I suspect that sunlight and heat were factors.

So, all in all, the weekend was just a bit less restful than I'd been hoping for. Oh, well.

And now, here are the pictures of Secondborn's pirate scar: 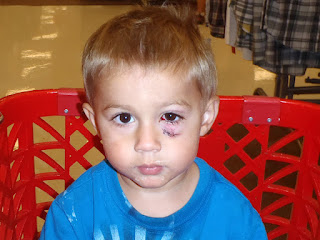 Saturday, around noon; about as rough as it gets. 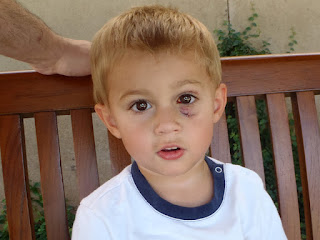