School is upon us again. The first day of first grade. I have to say that this went easier than last year, mainly because Firstborn and I are a lot more used to getting up at these early hours.

It started in much the same way: getting the boy out of the bed: 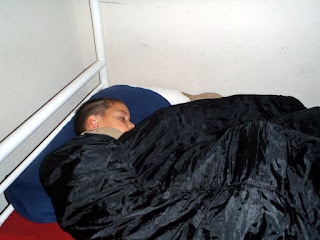 Once he actually opened his eyes, Firstborn was very cooperative. I mean, he crawled out of bed on his own, went to the bathroom, and let me brush his teeth. (I had to wait through the world's longest yawn before I could apply the toothbrush, though.) Then we went to the kitchen, where he ate breakfast: 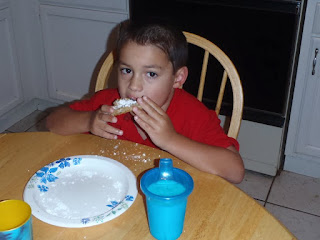 We drove to the school - and this year we remembered his lunch and his backpack and everything! Experience counts, I guess. We parked nearby and I walked him into the school. We stopped at the front door for the obligatory First Day Of School shot: 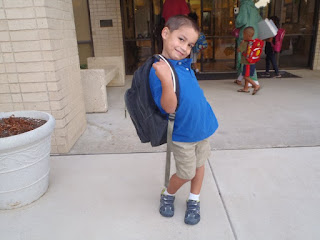 That's a superhero pose, in case you can't tell.
Then we walked to his classroom and greeted his teacher, and I explained about how she now controls his destiny.

...I guess I should explain that. Okay, so: last year, the Kindergarten teacher was trying to get Firstborn to do something, and he turned to her and said: "You do not control my destiny." Turns out he was wrong about that, as we explained when we learned about it. Ever since then, his opportunity to play video games on Saturday is entirely dependent on being cooperative and helpful at school during the week. We even printed up a little chart that says "Firstborn's (Video Game) Destiny" and has boxes for daily comments from the teacher.

Then Firstborn put his backpack and his lunch box away, gave me a big hug, and went to sit at his desk: 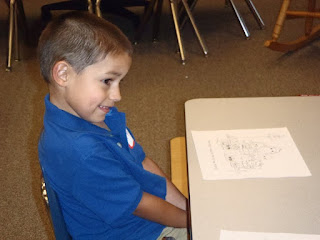 I slipped back out of the room, and went back to my car. Unfortunately, I was just a little too far back to get any video of the woman in the white van, who was yelling at the top of her lungs about how she didn't care how it looked, she was just trying to get there on time, and "you" were all insane. I'm not sure whether she was a parent or whether she lived in the neighborhood, but it was quite a performance.

...And then I went back home to be violently ill, for completely unrelated reasons. So that was the first day of First Grade. Tra-la!
Posted by Michael Mock at 9:00 AM