So, I went around on Sunday for about two hours, looking for scenes that I could photograph and use for landscapes in Surreal Situations. And, actually, I did pretty well. Someone had cleaned up the area I most wanted to use, which was disappointing personally but not a bad thing overall. However, I found a couple of nice alternatives, and got some pictures.

The difficulty, of course, is that the current setting for Surreal Situations is about three years into the Zombie Apocalypse. That means that I really need to avoid any kind of setting where someone has clearly been mowing the lawn. Also, any kind of setting with cars, unless I can find some cars that are weathered, rusted, covered in dirt, and whose tires have given way to rotting rubber.

The photo I was really hoping to get this weekend was a badly overgrown playground, but a lawnmower and a coat of paint has taken it completely out of my genre.

But, having spent about two hours driving around to grimy, overgrown areas and taking pictures of them, I decided it was time to get back to my father's house and collect the boys. I was all done for the day, I was going to drive straight back.

Then, on the way back, by the side of a major highway, I found a post-apocalyptic payphone: 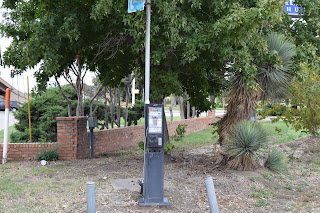 I was a little later getting back than I'd expected, obviously.
Posted by Michael Mock at 9:00 AM