Arrival of the Home Gnomes

A couple of weeks ago, we put a lava lamp in Firstborn's room. He doesn't like going to sleep in the dark, and I was hoping it would give the boys something to stare at while they fell asleep. Both the Beautiful Wife and I have disavowed all knowledge of where it came from, and the grandparents are (naturally) completely baffled.

So I've explained about the Home Gnomes, and that we probably have some in our house.

Home Gnomes, you see, move into your home. They're only about six inches high, so they're easy to miss. And sometimes they bring furniture with them from other people's houses, so there's no telling where that lamp might have come from originally.

Now, you might expect that Firstborn, at nine years old, would be a bit suspicious of this explanation. You wouldn't be wrong, either.

...Which is why, two weeks later, we "discovered" a tiny little door at the back of one of our cabinets. Clearly, it is where the Home Gnomes live. Clearly, Home Gnomes are real. And clearly, they are responsible for bringing the lava lamp to Firstborn's room. 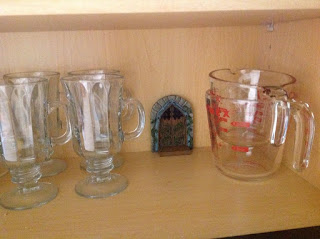 (He still doesn't believe us.)
Posted by Michael Mock at 1:01 PM