The last time I almost fell to my death...

So there I was, in midair, with a rock wall in front of me, air all around, and no idea what was below.

Maybe I should back up.

There's a place called Foster Falls in Tennessee. It's a place where the Little Gizzard creek goes over the edge of the Cumberland Plateau, in a sixty foot waterfall. The area beneath the waterfall is a deep, swimmable pool; and if you enjoy technical climbs, there are several climbing routes in the surrounding cliffs. As with most of that area of the country, it's also completely beautiful. 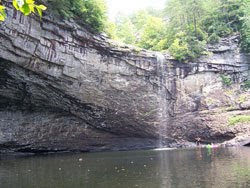 I'd hiked down with a group from the local college, under the auspices of the Outing Club, as part of a get-to-know-your-fellow-students program that ran just before the semester started. We'd spent the afternoon swimming, and I'd been toying with the idea of diving (well, jumping) from the top of the falls. I was told it had been done before, but it was a long route to get up to the top, and the height was more than a little intimidating.

But I was thinking about it. I was sixteen at the time, so I was probably also thinking about how to get laid, but I was definitely thinking about jumping off the cliff into the water. So, while I was swimming, I went out to the area where the water hit the pool below, and dived as deep as I could. There was nothing; there had to a bottom under there somewhere, but I couldn't swim deep enough to find it. Good. I moved over a few feet and tried again, with the same results. I tried that a few more times, checking my position relative to the falling water, until I'd assured myself that there was nothing in that area to land on.
Okay, so I had a safe landing zone, and a way to tell where that zone was from the top of the cliff. (It was just in front of the falling water.) Did I really want to jump off there? Yes... and no.

By the time I'd finished this, it was getting close to time to go. So, I compromised. About halfway up the cliff, to the right as you faced the waterfall, there was a horizontal ledge. (You can actually see it in the picture above.) If I could follow that far enough out, I could jump into my safe zone from half the height - and without the long, circling walk required to get back to the top of the cliff. Oddly enough, this was not the stupid decision that almost killed me.

So I followed the rocks up to the ledge, then started out across it. It was perfect for this: between four and six inches deep, and the top of the ledge actually angled back towards the cliff face. Even better, there was a second ledge at about the level of my ears. This was only about an inch deep, but it was still a great place for my fingers.

I had my nose in the rock, so it wasn't easy to keep track of my progress, but I wasn't too worried about it. The waterfall was a steady roar, and the ledge should basically run out just before I reached it. So I kept my fingers and toes on the stone, leaned into the cliff, and kept moving.

Then the upper ledge started to rise. It went from ear-level to just over my head. That wasn't a problem in itself, but a few feet further on it angled further up: a foot or two above my head. So now I had a choice: I could stick with the lower ledge (wide, angled in, but now lacking in handholds) or I could follow the upper ledge (much narrower, but more stable). I decided to follow the upper ledge, mainly because I felt better balanced hanging down from it than I did standing on top of the lower ledge with nothing to hold onto.

So I followed the upper ledge, which rose diagonally. Almost immediately, it came to a small plateau - and here the top of the ledge was no longer flat, but actually angled a little bit out. Just beyond, the ledge started back down... and almost immediately petered out. Well, all right. No problem; I could just go back to where I was, and follow the lower ledge. I shifted my weight to do this...

...and my fingers came off the rock.

This was, as you might imagine, a problem. I was twenty-five, maybe thirty feet in the air. My feet were now the only things in contact with the cliff in front of me. There was also a small ledge below me, and if my feet caught that, I was going to go spinning into an involuntary back flip. I did not want to do that.

My father - who has more of these experiences than any human being should rightly have survived - once told me that if you're doing something dangerous, you should always think about what could go wrong, and what you will do if it does. I had actually been doing that, and so when my grip came loose I knew exactly what I needed to do.

So, very calmly, I kicked off the rock. I was now in freefall, but I was also in a position to land with my feet under me. I loosened my body, and made sure my knees and ankles were bent. I took a breath, in case there was water under me. I didn't know; I hadn't had time to look down yet. My heart expanded to about half again its normal size, then did it again - this time to twice its normal size.

Just as my feet touched the water, someone behind me screamed. That triggered my first coherent thought since the rock let go of me: You think you're scared...?

But I'd managed to hit water. I stuck my arms out as far as they would go, kept my legs loose, and came to a stop at the bottom of the pool. I was crouched on top of what felt like a mid-sized rock, maybe two feet across, and my ankles were touching my butt... but all things considered, it was a pretty gentle landing. So I kicked back up to the surface, and got a lungful of air.

It was at that point that I realized that nobody was swimming. They'd all left the water, and were standing in a huddle on the shore. Presumably they'd been watching the whole show. I swam back over, and one of the group leaders (understandably pale beneath his tan) told me that it was time to go. So we hiked back out.

I learned later that the group leaders received a fairly thorough chewing-out for letting me get up there in the first place (as if they'd had in say in the matter; even if they'd yelled, I probably couldn't have heard them over the waterfall). It also became apparent that, despite having been the person in danger, I was probably the least traumatized person in the group. I've never been quite sure what to make of that, but it probably says something profound (about me, or about people in general, or something, anyway).

And I did do some small penance, by leading that same hike the following year and talking one of the new students out of jumping off the waterfall.