A Sampling of Tea! 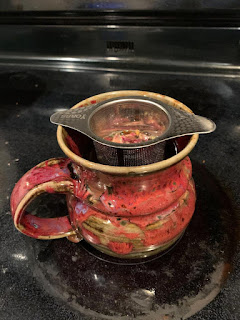 I recently ordered a sampler of teas from Desert Sage Natural, a small company run by a husband and wife who do their own blends. And since I'm trying all these out for the first time, I thought I'd make notes -- since, y'know, I'll be ordering at least some of these in larger quantities (quanti-teas?) in the near future. I usually drink my tea with a dollop of wildflower honey and a splash of whole milk, but for sampling purposes I'm going to do these in stages: just the tea, then add honey, and finally with milk as well.

First up in my selection is Helga's Loyalty (caffeinated).  (Most of these blends have their own geeky names, though I confess in this case I don't recognize the reference. Maybe the very cool Norwegian mythology cartoon?) It contains both dried apple and cinnamon, which gives it an overall fruity flavor and just a little bit of bite against a nice, rich background. The wildflower honey blends nicely into it: it sweetens the cup, but doesn't change the flavor much at all. Adding milk, on the other hand... it sort of smooths everything out and you lose a lot of the flavor.

Overall: I don't often drink fruity teas, but this one is good. Drink alone or with a bit of honey. Do not add milk.

Second up is the one that originally caught my eye: Steve's Three Alarm Zen (decaf). It's a green tea with hawthorn berries, peppermint, and chili and it smells amazing while it's steeping. It's also really good just as is: green teas always seem a little thin to me, but the peppermint is a nice touch... and then the chili kicks in, and between that and the steam it does amazing things to my sinuses. (I have "bad allergies" -- not in the sense that I react terribly strongly to most things, but in the sense that I'm mildly-to-moderately allergic to essentially everything airborne in Texas. Admittedly, this wouldn't be a problem if I didn't live in Texas, but as it stands I'm frequently a bit stuffy. So, the combination of steam and spice-heat is really, really nice.) I'm wondering how this would do with a bit of jalapeno honey, but that can wait. Right now, a bit of wildflower honey... Okay, yes, that blends really well and adds just a little bit of sweetness that plays along well with the heat. I don't think I'll even try adding milk; I suspect all that would do is rob it of the spiciness that I bought it for.

Overall: This tea is everything I hoped it would be. Drink it plain or with honey.

Third sample was Leia's Legacy (decaf), a black tea with cinnamon -- less distinctive than the others, but very good by itself or with honey. Probably does just fine with milk as well, but I didn't try it.

Overall: a solid, reliable tea -- and quite tasty; prepare it however you like.

The fourth one I tried was another decaf tea called Enchanted Forest (caffeinated), a black tea with elderberries and peppermint. The flavors blend into something more subtle than I would normally expect from peppermint, and the overall effect was quite enjoyable. This is another one that I didn't try with milk, but felt that a bit of wildflower honey sweetened and complemented.

Overall: Would definitely recommend; serve with honey or possibly alone.

Fifth: Triforce Tea! (Punctuation mine.) (Caffeinated.) It's a black tea, and the ingredient list includes rooibos and roasted mate, which give it a strong, smoky flavor. Definitely a tea that will wake you up in the morning! A bit of honey adds some sweetness, and a splash of milk helps balance the smokiness.

Overall: The smokiness isn't entirely to my taste -- at least not by itself -- but I'd recommend it with honey and milk, particularly if you want a good, strong tea.

Next we have Spindle's Bite (decaf), an absolutely amazing black tea with chili, rose hips, and rose petals, a combination which gives it this lovely rich flavor either alone or with a dollop of honey. I didn't try adding milk -- that just feels like a mistake for anything with any bite to it, and there's just enough chili in this to give it a nice little bit of heat.

Overall: definitely ordering more of this. I'm not sure if it's quite as sinus-clearing as the sample of Steve's was... but that could be a difference in how stuffy I was when I tried it. Drink it plain or with honey.

The last one I tried was Winter Is Coming (caffeinated) because of course it is. (No, I still haven't shaken off the lingering sense of foreboding that clung to everything in 2020: that if some sort of Zombie Apocalypse came along at this point I wouldn't even be surprised.) This one's a white tea with ginger and peppermint, which actually blend together really well. It's an interesting flavor on its own, but I find I prefer it with my usual dollop of honey -- which may say more about me than it does about the tea itself -- and it's another one where I suspect that adding milk would take an intriguing flavor and make it bland.

Overall: a nice change from my usual black teas, and every bit as good. I'll be taking it with honey, but some people may prefer it un-doctored.

In general... Well, first of all, apparently I really like chili teas. So I'm definitely going to be making more of those going forward. Looking over my notes, I apparently also enjoy teas with a bit of peppermint in them. My least favorites were the Triforce Tea -- the smoky flavor apparently isn't my thing -- and Leia's Legacy, which was quite good but didn't particularly stand out to me. Still, there was nothing in this selection that I actively didn't like; it's not like I was forcing myself to finish cups of tea here. ("For science!") And just having a bunch to experiment with was, well, fun. Hence the blog post.

If you're a tea drinker looking to branch out on your flavors, this is definitely a fun way to do it. The Desert Sage Natural standard sampler includes five different kinds of tea, and starts at $10 for a set of single teabags. (Prices go up depending on the amount of tea and the work required to package it.) Note that you won't be choosing which teas you want to try! You'll need to fill out a little questionnaire to explain your tastes and preferences, and let the sages send you what they think you'll like. It's not just a tea sampler, it's an adventure.

If that sounds like your kind of thing, give it a try!