While we were out of town, we stayed at a house that belongs to a friend of the family. This particular friend of the family happened to be in the ministry, at least until he retired. One of the rooms in this house was his office, so naturally I found myself browsing the bookshelves (as one does). In doing so, I stumbled across this: 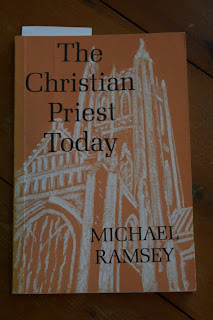 (If you can't read it, it's a book cover:
The Christian Priest Today, by Michael Ramsey)
I was, of course, charmed by this. It's such a topical and timely title, and being on this particular set of bookshelves, it had to be... yep: 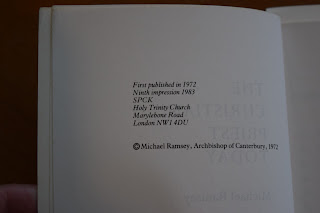 Just out of curiosity, I flipped open to the bookmark and looked at the (rather long) paragraph that this minister had marked. 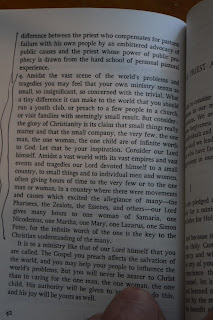 I'm not going to transcribe the whole thing, but it's basically talking about how, as a priest, you may feel that much of the work you're called to do is trivial and unworthy of the full glory of God; and that it's important to remember that so much of God's work, and so much of the value of Christianity, is found in the little things.

That's the kind of Christianity I grew up in.
Posted by Michael Mock at 9:00 AM