The boys apparently got a little... enthusiastic... with the train tracks at their grandparents' house on Sunday: 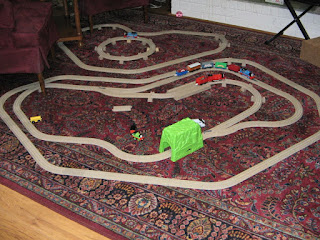 It's funny to me just how different they are. Firstborn was all about superheroes, powers, and battles - Ben 10, Bakugan, Batman, Lightning Zapzers, Bionicle, Skylanders, and like that. The closest he ever got to being interested in vehicles was Transformers, which aren't so much cool as vehicles as they are cool because they turn into giant freakin' robots and have battles. Cars, trains, and construction equipment interested him not at all.

Secondborn, despite being born into a house which was already well-stocked with the sorts of toys that his older brother preferred, has been Vehicle Boy from the word go. He likes cars, trucks, construction equipment, and trains: Mighty Machines, Bob the Builder, Thomas The Tank Engine, Hot Wheels, and things along those lines.

There's some overlap, of course; Secondborn sometimes enjoys playing with his brother's Skylanders, for example, and Firstborn - who would never dream of watching such things on his own - will now settle down and watch Thomas with his younger brother. But they have, in some ways, very different tastes... and those seem to be innate, rather than acquired.
Posted by Michael Mock at 9:30 AM