Too Much Myself Not To Have Children

Last week, a friend of mine pointed me at a misbegotten blog post called "Too Smart To Have Children" which I promptly picked apart. From this article, I learned that, as an American, I don't want children, and - by way of contrast - I want as much debt as I can get.

Yeah, I know. Surprised me, too.

See, until I read that, I would have sworn that I was doing my best to avoid debt. I mean, you'd think if I wanted debt, I'd have kept my old credit card, instead of paying it off and canceling the account. Admittedly, I got another credit card about a year ago, but at the time I would have sworn that I did that simply (and only) because without it I had no credit score whatsoever. But, no - turns out that it's because I want to run up a huge pile of debt. As much of it as possible, as quickly as possible.

And, of course, I was dumbfounded to learn that I don't want children. I would have considered the number of tests, medicines, and careful planning to be some sort of evidence of actually, y'know, wanting children. But it turns out that I'm American, so I must not have. Hell of a thing to learn, especially now: the older boy is five and a half, and the younger one's nearly two.

But, well, you can't argue with mindless overgeneralizations, so I guess I'm going to have to face facts.

And the fact is, I love these boys. I love being their dad. (And I love being married to their mom!) I love showing them things, and I love it when they show me things. So, in honor of the fact that stupid rhetoric is stupid (and wrong), join me below the cut while I show off my boys!

This is Secondborn. He is climbing. He'll be two in the middle of April. He is... indomitable. 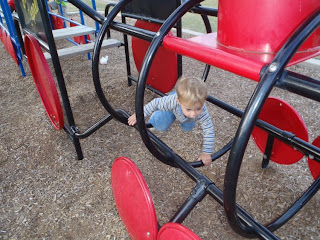 Here is Secondborn again. You can see Firstborn behind him. The boys are fearless - from where they are, you can see the floor below the netting; it's at least ten feet down. Both of them stopped to look, then went anyway. 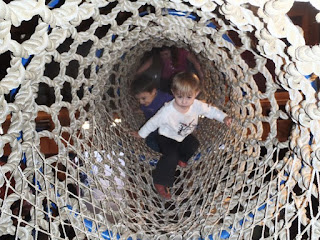 They are also getting old enough to play together as brothers. This pleases me immensely. Giant termite mound might not be the best place for them to play, but we're still learning about these things. 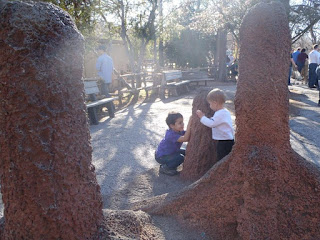 Did I mention the part where Secondborn is indomitable? Firstborn closed the gate to his room, to keep Secondborn out. Secondborn wheeled his scooter up to the gate, balanced on top of it, and tried to see if he could climb over. 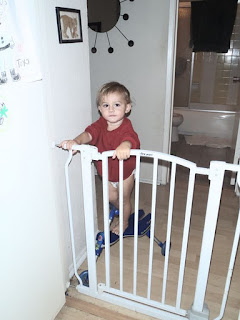 The boys attended a birthday party at a gymnastics place Sunday afternoon. If I get a chance later in the week, I'll see if I can upload some pictures (and maybe even video) from that.
Posted by Michael Mock at 9:35 PM

Email ThisBlogThis!Share to TwitterShare to FacebookShare to Pinterest
Labels: Parenthood