The Art of Whales

So, I received an email from Secondborn's art teacher yesterday. It said, roughly:

I wanted to touch base with you about Secondborn’s art today.  We are learning about coral reefs and underwater life.  Today, the class was instructed to sketch different underwater scenes, animals, and fish in their sketchbooks.  I messaged with Secondborn a little during the asynchronous time, as I saw that he was not in the Art Google classroom.  He said he knew what to do.  This is the sketch that he turned in. I have returned it to him and told him that I need to see a hand drawn sketch.  Can you please check in with him to make sure that he understands the assignment?

I opened the attachment, not without some trepidation, but I was clearly unprepared for... well... this: 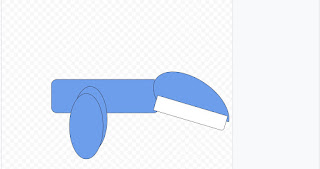 My friends, I want you to know that despite such a powerful provocation I did not panic. I merely called Secondborn over to me and asked him what this was that he had turned in for the morning's art project.

So, I explained that after he was finished with his final class, he would need to read the actual instructions for the assignment and submit a drawing with sea creatures and a coral reef. I mentioned that this would actually have been quicker and easier if he'd taken the time to read the instructions first. I recommended that he perhaps should not try to do art using only the Google Shapes app on his school laptop.

Then he went back into his room to sign on for his last class, and I went off to have a cup of tea and a mild nervous breakdown.

Epilogue: He did in fact do a proper sketch, his art teacher is pleased, and if the gods are merciful we shall never speak of this episode again.