It's the beginning of December. Beautiful Wife is busy grading, and has thereby discovered her mutant power of being surrounded by spikes of spirit energy that stab anybody who gets too close or otherwise attracts her attention. She needs time -- and solitude -- so she can make some progress, but the campus is closed on Sundays and there aren't a lot of other places to go. What to do?

Well, for my part, the answer was "bundle both boys into the car and flee the house!" Only we needed to stay fled for, I don't know, at least five hours. Twelve would be preferable. So... where to go?

Yesterday's solution was the Dallas World Aquarium. The boys have been there before, but it's an amazing place to walk around and there's always something you didn't notice before. (Secondborn: "Look! I found a secret door!" ...Which the staff uses to access the cages, but yeah: pretty cool. Not nearly as funny as having a manta ray swim up behind him in the Great Glass Underwater Tunnel and scare him right off the ledge, but pretty cool.) (Firstborn, meanwhile, wandered around pointing things out to anyone who got in range like some sort of miniature museum guide: "Look! The vampire bats are cuddling while they hang from the ceiling. They're soooo cuuuute! Cuddle-bats! Look! Right up there!")

So, y'know, it went pretty well. And it did keep us out for a good five and a half hours, though some of that was travel time. 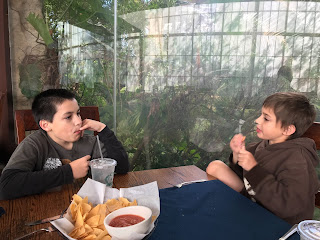 Anyway, next Saturday I'm taking them to the Dallas Zoo if the weather holds. I'm going to see if I can gather my father on the way, and if any of you who live nearby want to join us, well... drop me a line, we'll make an outing of it. (The comments here work fine, or if you follow me on Facebook or Twitter you can send a message that way.) Being the crowd-averse person I am, I'll be aiming to get there when it opens at 9:00 a.m. so we can get started before it really fills up. (Or maybe, if the dark gods favor me, it won't fill up.)

Onward and upwards! Nothing but good times ahead!
Posted by Michael Mock at 9:00 AM