So, between long stretches of swimming at Granddaddy's house on Sunday, the boys asked if we could get out the BB gun. (It's an incredibly old one, dating back to my childhood, and we've been using it to introduce the boys to the basics of gun safety.) So we did, but of course we needed targets. Granddaddy suggested that we grab some of the spare cardboard boxes out of the closet.

Cardboard boxes alone don't make terribly interesting targets, though, so I grabbed a sharpy and dew a target on the first one: 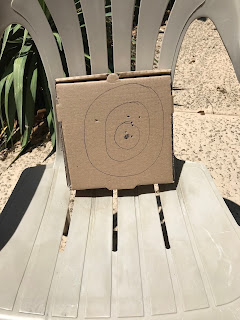 As you can see, we shot that target a bit, then moved to the next -- only, Secondborn announced that her was going to draw this one: 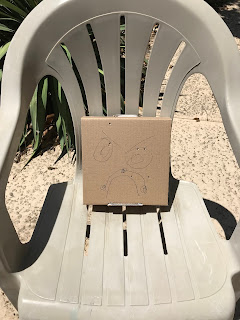 Well, that dastardly fellow barely stood a chance. Firstborn, however, announced that this was clearly only a henchman, because he didn't have enough mustache to be the evil genius. So, for our last target, Firstborn took the sharpy and gave us... this: 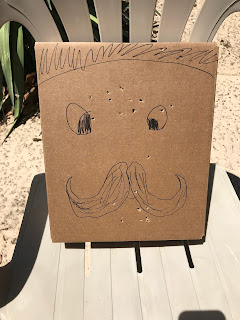 I am pleased to report that the boys were victorious not only against this final boss, but against his styrofoam-cup minions as well.

It's clear to see who got the artistic talent in this family, and I am here to tell you that it ain't me.
Posted by Michael Mock at 9:00 AM