In later days these tales would become confused, lost behind the many deeds of Jush Two-Axe: the accounts of his great wisdom and subtle guile, of his skill with blade and spell. Jush it was who would speak against the injustices of the Emperor Agistin; Jush who would lead the Orcs and their allies into the lands beyond the Empire, there to form their own kingdom; Jush who would drive back the Imperial armies again and again. When the great beast came like a plague with his barrel and his broom, sweeping away the naughty children each year, is was Jush who laid a trap and stood to face him in that last, fateful battle.


So we remember King Jush: warrior and priest, wizard and rogue. So we remind ourselves that even one of humble origins may be favored of the gods, and rise to do great things. Remember, and celebrate his birth with us. 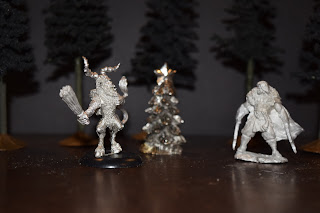