And there were rangers living out in the woods nearby, keeping watch over the land and its animals at night. A Celestial Lord appeared to them, and the glory of Pelor shone around them, and they were mightily startled. But the Celestial said to them, “Do not be afraid. I bring you good news that will cause great joy for all the people. Today in the town of Grawl a Savior has been born to you; he is the Savior, the Chosen One. This will be a sign to you: You will find a baby wrapped in cloths and lying in a manger.”

When the Celestial had left them and gone into the heavens, the rangers said to one another, “Let’s go to Bethlem and see this thing that has happened, which Pelor has told us about.”

So they hurried off and found Mara and J'suf, and the baby, who was lying in the manger. When they had seen him, they spread the word concerning what had been told them about this child, and all who heard it were amazed at what the rangers said to them. But Mara treasured up all these things and pondered them in her heart, for she was a wizard and prone to overthinking things anyway. The rangers returned, glorifying and praising Pelor for all the things they had heard and seen, which were just as they had been told. 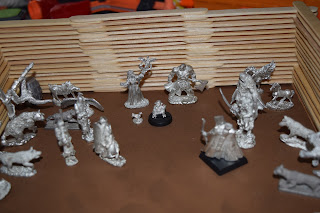