I've been seeing another run of "Share The Gospel" billboards recently, so I thought I'd go check out their websites and see what they have to say.

First up: Wake Up World. 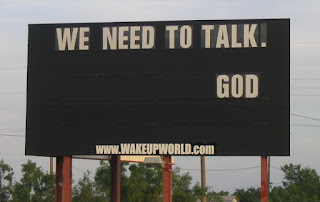 Their website is surprisingly minimal for a group that "exists to bring spiritual awakening, awareness, and curiosity to our world by having a presence online, on billboards, and in newspapers." There's the homepage, the About Us page (which doesn't actually say much of anything about them), the Contact Us page (which at least gives an address -- in Snyder, TX, which is a bit west of Fort Worth), and the Free Gift page. The Free Gift page is the most substantial thing on the site, and it isn't much; it's a slideshow that looks like any number of "Have You Been Born Again?" pamphlets from back in the eighties. You probably know the sequence already: We are all sinners, sin separates us from God, God provided Jesus' death on the cross to bridge the gap, now say the Sinner's Prayer so you're covered. The About Us page says, "Even if you do not believe in god, we hope that you will explore him further," but if you are going to do that, you won't find much to explore here. Maybe they expect people to contact them, or interact on their Facebook page (they have a bunch of links to their social media sites), but the website itself is strangely barren. Possibly the most interesting thing about it was their background image: 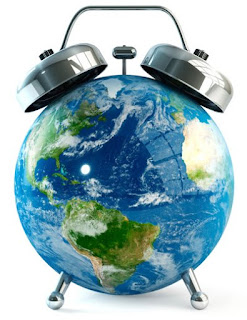 I assume that the implication here is that the earthquakes spoken of in Matthew 24 won't be regular tectonic activity, but rather a planet-sized alarm clock finally going off.

Next up: Jesus Cares.

This website opens with a video that seems determined to depress you (or, if you're already depressed, to depress you further). Be warned: it autoplays, and there's audio. And about halfway through, it becomes apparent that the benighted thing is supposed to be narrated by the Almighty. I am... as a former Christian, I find this rather appalling. ("Are you feeling trapped and hopeless? Come to our website, where we presume to speak for Jesus!" Gahhhhh...) I don't think it's just the video, either; the billboard seems to imply that the site has a 2,000 year old resurrected Nazarene manning the chat windows, and I'm pretty sure that isn't the case.

The main focus -- aside from the videos, which are plentiful and slickly produced -- is on talking to their "coaches", either by email or online chat. That's not an entirely bad approach; at least there's some potential for genuine human interaction there. I do wonder how well-equipped those coaches are to deal with someone who's, say, clinically depressed or actively suicidal, since jesuscares.com is pretty up front about the fact that their setup is designed to point people to Jesus and/or get them into churches. (They do have a section to help you locate a nearby affiliated church, too.)

Overall, it's a much more developed site than Wake Up World; there's more to look at, more information to explore, videos to watch, an actual statement of faith, etc. That said, it's still basically the same old message repackaged: whatever your problems might be, Jesus is the answer. (I don't think they'd take that as a criticism, either; they're pretty up-front about saying that they aren't really trying to do anything theologically new.) I admit to being a bit curious about whether much of anybody really finds this sort of thing helpful. It seems like the sort of people who would be most receptive to this sort of message are the ones who believe it already, and therefore don't much need to hear it repeated.

Finally: I'll be back... Jesus 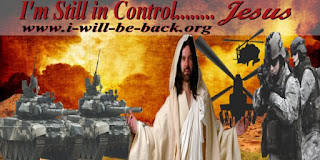 This last site is the least professional-looking of the three. The homepage is basically just a bunch of Bible verses followed by the Sinner's Prayer, but... well, first of all, somebody has no idea how to use ellipses correctly. Instead, they've used a row of dots going halfway across the page... and that's in their title graphic. Second, they've divided the page text into two columns (why?) and used a background image that's much too dark and has too much texture. Combined with a relatively small font, this makes the homepage annoyingly difficult to read; the text keeps fading into the background. There's a row of menu buttons at the top, which are mostly repeated as text links at the very bottom of the page. The whole thing is kind of muddy, and looks like it was built around 1992.

Their About Us page states that the people behind the site are "a group of interdenominational Christians who want to remind the world that Jesus Christ will return as he said" and omits to mention that they are desperately in need of someone capable of proofreading. (The Contact Us form on the same page includes the instruction, "Tye message here." I'm not sure who Tye is, but hopefully he's not the only one who can submit a message there.) The rest of the site... eh, there's not much else to say about it, except that it's equally odd and amateur.

So, there you go. My curiosity is satisfied. I suppose something on these sites might be new and different to some young seeker somewhere (though as I've said before, I kind of doubt it; Christianity is ubiquitous enough that even people raised in other religions get exposed to the broad outlines of Christian belief). For someone like me, it's the same old mess of presuppositions and unsupported assertions, approaches that would have made me uncomfortable even back when I was a Christian.
Posted by Michael Mock at 9:00 AM

Email ThisBlogThis!Share to TwitterShare to FacebookShare to Pinterest
Labels: people are strange, religion