At last, the costumes

I was going to post this last night, but it turns out that Firstborn was appearing in a school play, so we went to that instead. He had won the role of First Bat, and had a speaking line which he delivered beautifully. So, instead of downloading Wednesday night's costumes, we were off taking pictures of Firstborn in an entirely different costume: 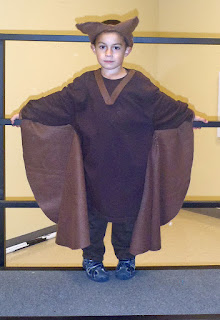 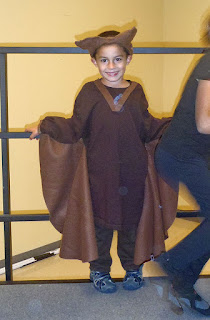 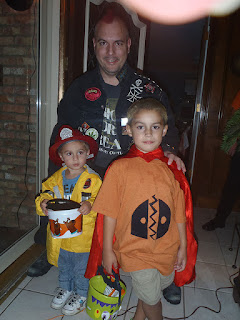 The logo for Lightning Zapzers' shirt was actually designed by Firstborn; it's a pair of doors with a lightning bolt between them.

And, for anyone who wants a good look at the front of the jacket and my self-inflicted mohawk, I will - just this once - break my personal rule about putting actual pictures of myself on the Internet. 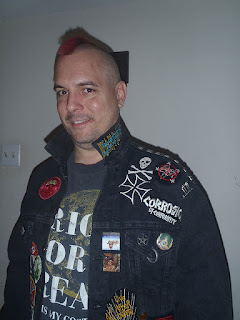 I'm not sure how many people realized I was in costume, actually.

Also, I appear to have hit some sort of sweet spot in the never-ending cycle of Fashion: that jacket, which I consider a hideous and embarrassing reminder of my youth, is apparently considered "cool" by modern-day teenagers. It's not even "retro". It's just cool.

I'm really not sure how that happened. I'm never cool. This is only the second time in my life that I have been, however briefly, cool.
Posted by Michael Mock at 9:32 AM