That's right, I've decided to try my hand at a movie script. Behold:

LARRY MARTIN (mid-thirties) lean, holding baseball bat in one hand, parts blinds and looks out through dirty window. Room behind him is dim. Several other figures wait amid weapons and camping equipment.

LARRY MARTIN
They're still out there. (pause) I think there's more of them.

TONY BRIGHAM (late twenties) leans shotgun against wall and kneels down to start rolling up a sleeping bag.

SHELLY MARTIN
Go where? Those things are everywhere.

TOM BILLINGS stirs. He is sitting on the edge of a table. He is in his late forties, portly, dressed in the ragged remains of a suit. His tie hangs loose around his neck.

TOM BILLINGS
Well, you're right about one thing. It doesn't matter. This is a judgement from God. He has poured out His wrath upon us.

TONY BRIGHAM
Brother, if you'd known anything about God's Wrath, you'd've had an ark already built.

SEAN KEEGAN (late teens / early twenties,) enters, expression tense. He gestures sharply, then points down. In his other hand, he holds a boar spear.

KAYLEEN GREY
They're in the building.

Kayleen Grey starts gathering cans from the table where Tom Billings is sitting.

LARRY MARTIN
Get to the roof. Don't use the guns unless you have to. We'll block the door and wait. When it gets dark, we can cross to the next building and make our way down.

Okay, so, I've decided to branch out. Most - nearly all - of my writing is some sort of prose, and most of the time, I'm fine with that. Recently, though, I decided that it was time to try something new. And, since I love you all so much, I thought I'd give you a sneak peak at my new project. Yes, it's a film script; and yes, it's a horror movie. Nobody who actually knows me should be surprised by that. I've even mocked up a movie poster for it. And so, without further ado, my next project: 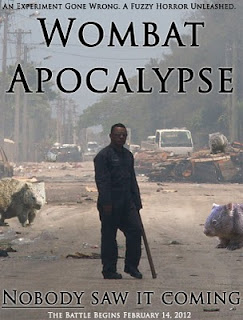