Sunday In The Park - the very, very wet park

So, on Sunday my father went off with my brother and his wife to see their son perform in a play. (I need a good designation for the child -- I don't want to use his real name online, but Boy Cousin doesn't seem quite specific enough and everything else I can think of is worse. He's basically the same age as Firstborn, and this was a school play. But I digress...)

Anyway, with Grandfather occupied our usual Sunday afternoon visit was off. This wasn't really a problem, though. After something like four straight days of perpetual rain, the sun had finally come out and the day was gorgeous. "How lovely!" I exclaimed to myself. "I shall take the boys to a park!" And I did.

Secondborn had requested the Tank Park, which is so called because it has an honest-to-God World War II tank parked in the middle of it. The sun was warm, the air was cool but not cold, you could not ask for a nicer day, and I clearly had not thought this through because naturally the whole park was flooded: 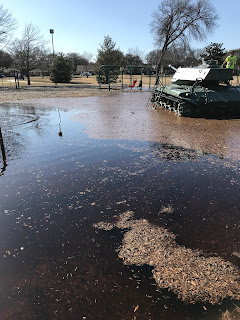 Secondborn was... displeased. Volubly. At length. Firstborn, meanwhile, stepped out onto an area of wood chips which were clearly solid ground, except that they were floating on top of six inches of water and his foot promptly disappeared under the wood chips. With his foot and his pants already wet, he elected to keep going, and found his way out to the swing set: 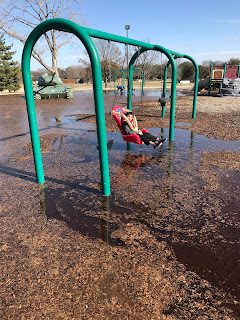 Secondborn eventually got over his irritation with the rain, the existence of water, and the way nature itself was conspiring to torment him. He decided to slog out through half a foot of water to reach the tank. Admittedly, he complained the whole way and then declared that he was Never Getting Off This Tank, but personally I think he was just getting a Genuine Realistic World War II Experience.


Firstborn, meanwhile, had found a couple of kids near his own age, and was... well... running with the whole experience. (He's the one in the jacket, who takes a sharp right and heads off towards the farther swing set.)


All in all, I think it was a pretty good time -- and while we eventually left because Secondborn had slipped and scraped up his arm and leg and soaked himself completely, I think this will be the sort of thing that the boys look back on fondly as they get older. Either that, or they'll use it as leverage when they want something from me. ("So, Dad... about Christmas... you remember that time when you made us play at the park even though it was underwater?") Yeah. Probably leverage.
Posted by Michael Mock at 9:00 AM