Could you wait just a couple of days?

This isn't the sort of thing I usually post here, and it will probably get reproduced in the Book O' Parenting, but I wanted to get it down while I was thinking about it. So, here you go.

So, last Saturday on his fourth birthday, Firstborn Son slipped while climbing down from something. He didn't fall far, maybe two feet at most. I really expected him to just bounce right up, as he usually does.

Instead, he cried... and kept crying. Apparently he'd clocked himself on the underside of his chin. So I felt around down there, making sure the bones were all intact. Then I checked his teeth. Then I carried him back to the picnic table, where he steadfastly refused to do anything but lay on the bench.

I sent my dad back to our house for Motrin, and took him into the pool. (We tried both ice cubes and a cold Capri-sun to keep the swelling down, but he wouldn't take either one for more than about five seconds; the pool was the next best option for keeping the area cool.) And, after a bit of swimming and some Motrin, he did seem to feel better. So, after the party, we went home and he spent most of the afternoon playing Lego Star Wars (and opening robot toys).

I checked his jaw and teeth again before I put him to bed. Honestly, I wasn't too worried: he'd been eating with no evident discomfort, so he'd probably just bruised himself. I could even see where some of the bruising was.

Well, by Sunday evening I was starting to reconsider. There was still only a little real bruising, but the bottom of his chin had swollen... badly. Like, all the way up to his cheekbones. That badly. He still wasn't showing any discomfort, and he was still eating without difficulty, so I stood by my initial diagnosis; but man that was uncomfortable to look at. He'd gone from this: 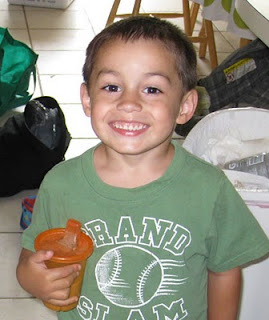 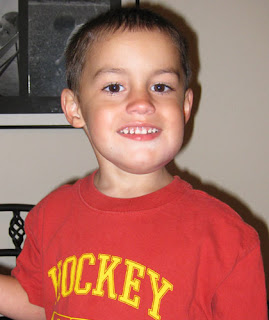 It was like someone had snuck in and replaced my son with a tiny clone of Jay Leno. It was creepy. I mean, he spoke like my son, he acted like my son, and he played with the same toys as my son; but every time I looked, I found him wearing a stranger's face. I spent most of Sunday in the grip of a deep, quivering panic that I couldn't do anything about.

My wife, who was understandably upset by the idea that her son was now disfigured, declared that she was taking him to the doctor on Monday. I didn't expect them to find anything, or be able to do anything about this, but I agreed anyway: I hadn't expected the bruising to reach these epic proportions, either. And even if I was right, it would be mightily reassuring to have a professional tell us that our son was still basically okay.

So she took him, and the doctor checked for a long list of possible injuries (including several things I hadn't even considered: damage to the hinge of the jaw, ruptured eardrums, and pockets of scar tissue forming in the swollen area). The doctor then told my wife more or less what I'd expected: the boy just needed time to heal. "Relief" is entirely too mild a word for it; it was like having a massive rock lifted off my genitalia.

So we put him to bed Monday night (along with a couple of the newly-opened robot toys), and eventually went to sleep ourselves.

And then, at three in the morning, my wife came into my room and turned on the lights to inform me that Firstborn had somehow managed to fall out of his bed and bite his lip. Now, first of all, this never happens. The child has been alive for four years, and he's never once rolled out of his bed in the night. We even have a little barrier in place, to keep him from doing that. How in Hell did he manage to do it now?

Second, I was in absolutely no condition to deal with this. The clutch on my brain was broken, and no matter how much I revved it, I couldn't find a gear. I staggered out into the hall with my wife, and looked past her to see Firstborn, who had followed her out of his room. My wife immediately turned and hustled him back to his room, which left me lurching along behind them and making inarticulate grunting sounds that were meant to convey things like, Wait! Come back! I'm supposed to be helping you! I mean, she'd woken me up in order to help him, and now she was herding him away from me.

I finally made it into the boy's room, and found that while he had bitten his lip, he apparently hadn't done much else. (I later found a small bump on the side of his head, but it was barely detectable.) So I wiped up the blood, gave him some ice water to drink, and added another round of Motrin. And, after a while, he went back to sleep. I, of course, didn't.

So, for most of Tuesday, my one recurring thought was this: Couldn't you at least wait a couple of days before hurting yourself again? This was, as often as not, accompanied by another thought: Arrrgh!

All's well that ends well, I suppose. The swelling is going down, and Firstborn is starting to look like himself again. I'm still short on sleep, but I'm pretty much used to that by now. Give me a few more weeks, and no doubt cognitive dissonance will set in and I'll think that these are the moments that make parenting worthwhile.
Posted by Michael Mock at 2:46 PM