The Joys of Parenting

I am incredibly proud of these boys. They are bright, inquisitive, kind... and very, very active. But hey, I didn't really want to go to sleep at night anyway. Or keep anything delicate anywhere in our house. So it's all good, really.

Firstborn is currently in Kindergarten. He has learned to read, and his reading skills (and vocabulary, etc.) are growing by leaps and bounds. He's still doing gymnastics, and he's started climbing the fence in our back yard. Oh, and jumping off the fence in our back yard. He's also starting to play with his younger brother - Secondborn is just old enough for that, now.

Secondborn is learning to talk. He has a pretty good vocabulary - though offhand, I have no idea how many words he knows - and routinely constructs two-word sentences. He's also started asking "What?" and "Why?" fairly frequently. He's still blond, which means he picked up recessive genes from both his parents - or else the Faeries swapped our dark-haired child for a blond changeling, somehow. He can walk, run, climb, and jump - all with surprising skill. And he gets into everything.

I've mentioned before that parenting is a huge job, which essentially never ends, and which requires a massive investment of time, energy, and attention. It is not for everybody. Right now, though, I just want to talk about why I love doing it - me, myself, personally.

So join me below the fold, where I can continue bragging with pics and video: 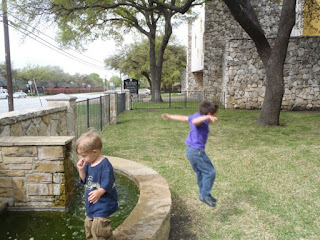 (I call this one "Before The Splash".) 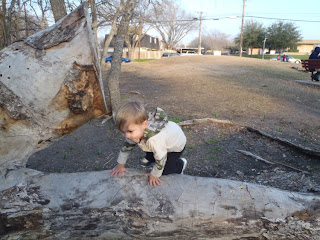 Secondborn is also unafraid of heights - though he does still want me to come with him on the slide. 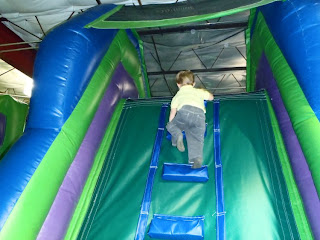 Secondborn has decided to get an early start on his training in Parkour...

And, finally, from a birthday party we attended on Saturday: Firstborn on a climbing wall. 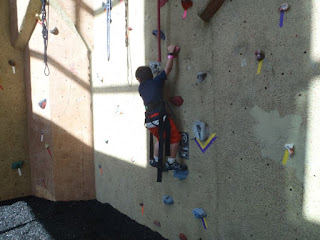 The facility was actually willing to let me put on a harness and try a bit of climbing myself, which was awesome. I haven't done anything of the sort in years, though I used to do a lot of climbing - some of it categorically insane, I might add. So, excited as I was, I was also a bit nervous that I'd discover that I'd gotten too far out of shape for that sort of thing.

I can still do it, though - two ascents, straight to the top, both with mild overhangs to cross along the way. I felt it, though, mainly in the forearms and the gut - I'm not as eighteen as I used to be. Fun, though. I'm seriously considering taking up climbing as an exercise program.

And that's it. Thanks for indulging me while I show off a bit.
Posted by Michael Mock at 7:31 AM