Last week was a family vacation - out of town, with essentially no Internet connection. So, basically, we took three families and stayed at a house in the Monteagle/Sewanee area of Tennessee, about halfway between Nashville and Chattanooga. Our crowd (myself, the Beautiful Wife, and the two boys) had one bedroom; my brother's crowd (brother, his wife, their son, and their dog) had another; and our parents had the third. One of the goals for the trip was to introduce the boys to caving, the way my brother and I had grown up with it -- and, not incidentally, do some spelunking ourselves. 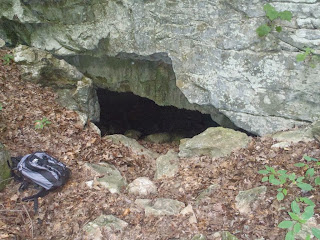 The Entrance to Dry Cave.
This was the first cave we tried on this trip; it's called Dry Cave, presumably to distinguish it from Wet Cave, which is just down the road a bit (and currently not open to visitors). Basically, you start in Sewanee, drive down to the foot of the mountain, and then hike back up a ways until you come to a massive sinkhole; the entrance to the cave is off on one side of the sinkhole.

Dry Cave is basically one big room, with a high ceiling and only a single side-passage (and that not terribly long). It's a good beginner cave: a reasonably larger entrance, plenty of room so you can stand up straight, and (of course) dry, so it's easy to stay warm enough. The most difficult part of it was the hike, which was fairly steeply uphill on the way in. I went around the walls leaving glow sticks (chemical lights) at regular intervals; then we had everybody stand in the middle and turn their lights off for a minute. (Then, on the way out, I had to go back around the walls and collect all the glow sticks -- don't want to trash up the cave, after all.) The boys all seemed to enjoy the experience; so did their grandfather. 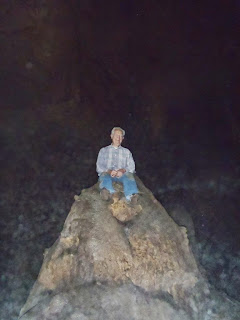 My father, sitting on a stalagmite, because he can. 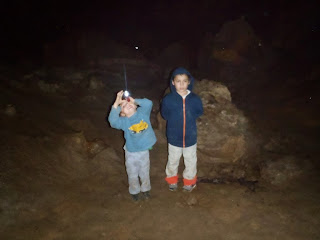 My two boys in the middle of the cave. 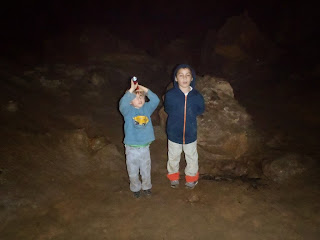 Also my two boys in the middle of the cave.
After that, we went back outside... 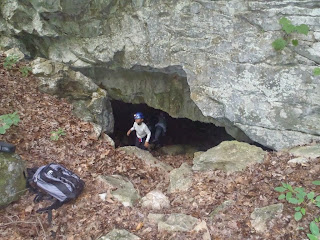 My nephew emerging from the cave. 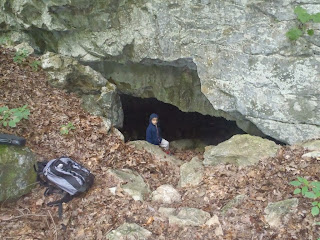 Firstborn emerging from the cave.
Our second attempt was going to be Monteagle Saltpeter Cave, a site where they'd gathered saltpeter for gunpowder during the civil war. That one... didn't go quite as expected.