The Cold War-est Book Ever To War Coldly

So, my dad is sorting out old books (many of them from my childhood), which mainly means putting them in boxes and letting us go through them. Some of them are classics; some of them are odd. I mean, Tales of a Fourth Grade Nothing is a respectable title for any childhood library. I discovered (and found that I had fond memories of) Danny Dunn on a Desert Island, and passed it along to Firstborn, who also enjoyed it. On the other hand, some of them are just... kind of creepy. I'm still baffled by The Lemming Condition, for example. And only marginally less creepy is today's selection: 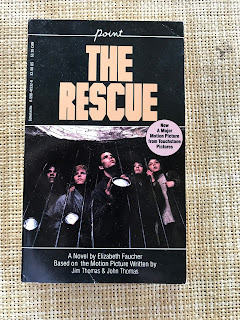 The Rescue
A Novel by Elizabeth Faucher
Based on the Motion Picture Written by Jim Thomas & John Thomas
"Now A Major Motion Picture from Touchstone Pictures," the cover proclaims proudly, disdaining any sensible rules for capitalization. (I have no memory of such a Motion Picture ever existing, but I'm sure it did.) But the real wonder of this thing is the summary on the back. The book was apparently published in 1988, which puts it firmly in the same era as Iron Eagle, and... well... just read it: 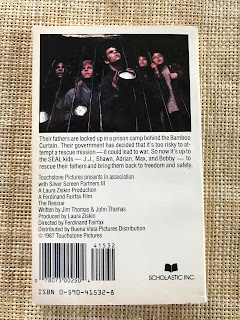 Their fathers are locked up in a prison camp behind the Bamboo Curtain. Their government has decided that it's too risky to attempt a rescue mission - it could lead to war. So now it's up to the SEAL kids - J.J., Shawn, Adrian, Max, and Bobby - to rescue their fathers and bring them back to freedom and safety.

That's right, kids: it's your responsibility to Save America by doing Something Insanely Stupid That Might Actually Cause A War Heroic. Yeah.

You go right ahead with that.