Puerto Rico As Our 51st State

It seems that Puerto Rico has voted in favor of statehood. This is going to be a contentious issue, for several reasons. First up is that while the vote was overwhelmingly in favor -- like, 97% in favor -- only 23% of the population turned out to vote. (That's low enough to make state-dwelling American voters seem positively civic-minded by comparison.) Secondarily, Puerto Rico can't simply declare itself a full state; that has to be approved by Congress, and the sheer amount of crass political calculation that will go into such a decision staggers the imagination.

Possibly the biggest problem, though, is this: even if those hurdles were overcome, where would we put the fifty-first star on the flag? I mean, right now we're all neat rows of little white stars. An additional star would totally throw off the arrangement.

Well, I can't help with either of the first two issues, but I do have a solution for the big one. Here's my design for our brand new flag, one which would incorporate all fifty-one states and make a clear statement to the international community about who we are as a nation. In an excess of humility, I have decided to call it New Glory: 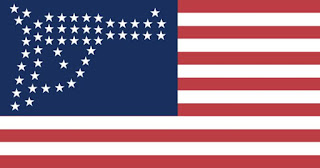 Whaddaya think?
Posted by Michael Mock at 10:00 AM