Firstborn decided to do his science fair project with his friend, who I'll call Legolas (since that obviously isn't his real name). The plan was for them to write letters to each other using invisible inks, exchange the letters, and then use SCIENCE!™ to decipher the messages. So, Firstborn wrote his message in lemon juice (the lemon in question was happy to offer its life in the pursuit of SCIENCE!™). Legolas, meanwhile, wrote his own message in... I don't actually know. Something that was supposed to be fluorescent, but otherwise invisible. The messages were then placed in sealed envelopes, and the parents arranged an exchange (which probably looked somewhat like a particularly amateurish drug deal, but I digress).

The idea was that each boy would then use his SCIENCE!™ to decipher the other's message. In the event, however, we couldn't get Legolas' message to glow. Our first attempt involved a black light bulb that the Beautiful Woman dug out of one of our closets. I'm pretty sure the problem there was the bulb, which dated back to our last Halloween party... which was a good ten years ago. So, I went out and bought a second black light bulb, and this one actually made things glow. Not the secret writing on the paper, mind you, but other things. Socks, for example. Do black light bulbs go bad? 'Cause I'm guessing the first bulb just went bad.

Anyway, tonight Firstborn and his mother went over to Legolas' (and the rest of the Fellowship's) house. There, they discovered that given a sufficiently strong black light, the mystery letter glowed just enough to be slightly distinguishable from the rest of the page. Then the boys wrote everything up, and assembled it onto the cardboard triptych which is required for its presentation. This was done with a truly laudable lack of wailing and/or gnashing of teeth; I think the chance to see his friend made a big difference to Firstborn.

So, tomorrow morning, the school will receive... their SCIENCE!™ The boys did their own work, so it's a lot less neat than it was last year, but it's theirs. We're very proud of them. 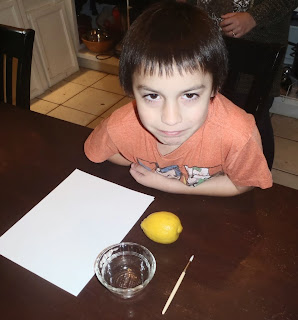