We have chocolate milk!

No, wait. I don't think I'm explaining that very well.

Something is... wrong... with the milk. There are... clumps of dark sediment... floating in it.

This looks suspiciously like what happens when you try to mix the hot cocoa powder into cold milk.

And, in precisely the same way that I know that this is chocolate, I know exactly how it got into our milk jug. I know, beyond any reasonable doubt, exactly who put it there... and, contrary to what some people might assert, it was not the cats.

So I go to pour him him a cup of his homebrewed, chocolatish milk.

It is at this precise moment, with a cup on the table before me and a jug of milk tilted to pour, that I discovered that the chocolate was not the only thing in the milk jug.

There was also a straw.

I discovered this as it emerged from the top of the jug, carrying its own special, randomly-aimed stream of slightly chocolate milk. It was a matter of purest luck that I noticed in time to prevent utter catastrophe.

Whether he'll remember that vow tomorrow is anybody's guess. 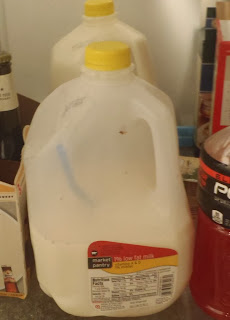