The sudden change of weather in Texas has led to a surge in illegal immigration in the Dallas/Fort Worth Metroplex. New arrivals seem to be appearing everywhere, and estimates of their number range from the thousands into the hundreds of thousands. The suddenness of their arrival - and their conspicuous lack of documentation - has sparked concerns that their presence will further worsen the unemployment rate, create further strain on local facilities (such as emergency rooms) which are already operating at capacity, and contribute to crime and other law enforcement issues.

When asked for comment, these strange new arrivals offered no reply. It is unclear at this time whether they even understand English. They have little in the way of clothing, and no apparent shelter. Most appear content to loiter in public places, but there reports of them blocking sidewalks or doorways and refusing to move. Local police admitted that this can be a nuisance, but pointed out that there is nothing threatening in the behavior. 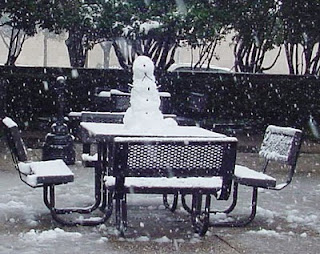 Some public officials have suggested that these immigrants will leave on their own in a few days, but others have voiced doubts: after experiencing the American quality of life, will they really be in any hurry to depart? Only time will tell.